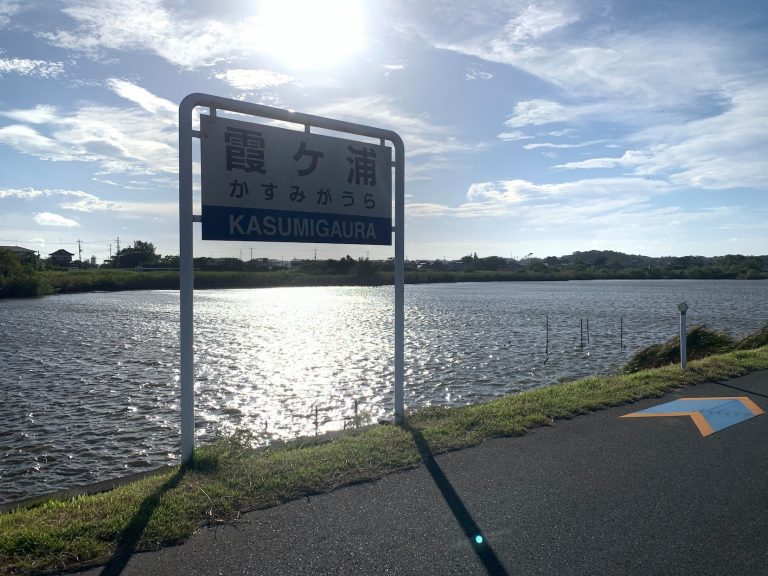 Lake Kasumigaura is the 2nd largest lake in Japan, next to Lake Biwa in the Kansai region. I researched about the lake and it seems to be famous amongst cyclists. I knew about this lake already because of the different flyers that I get, but unfortunately could not understand the contents. I was only reminded of this during our company’s cycling club meeting. One of the planned activities was to do the Lake Kasumigaura Loop. They sent the route to me and it seems pretty good. So instead of waiting for November, I went ahead and rode! It was a holiday last September 23 so I planned my trip immediately.

Before anything else, please watch this short video I created during my ride.

If you are coming from Tokyo side, Lake Kasumigaura is about 60km Northeast of Tokyo. I took the local train from Kawasaki station to Ueno station via Tokaido line. After that, I then transferred to the Joban line bound for Tsuchiura. It was fairly a decent ride on a holiday. Seats were almost empty and the right itself was very peaceful. I arrived at Tsuchiura station around 10:20am.

Now here’s what more amazing in Tsuchiura. Just outside the station there’s a mall called PlayAtre. It is specifically catered to cyclists. You can even walk your bike around the establishments. You just have to follow the bike lines on the flooring area. Apart from that, the facilities in Basement 1 (B1 Floor) is superb. There’s a locker, a vendo machine, a washroom, bike parking, and a delivery service.

The changing room is free, but there are no seats or hanger inside. So you will have to put your clothes and things on the floor. There’s also no coin changer in the area so prepare 300 yen coin for locker rental, and 300 yen for using the washroom.

It took me about 30 minutes to prepare myself as I still wasn’t familiar with the area. I hit the road around 11am. I decided to do a clockwise direction. At first I lost my way leading to the cycling road, but in any case I managed to arrive at the lakeshore. The weather was pretty hot, but not as hot compared to my Minami Boso Loop ride in Chiba last month. The wind was pretty strong and cool so it kinda didn’t burn my face. I thought having wind was fun, but it wasn’t. It started to become really difficult for me to ride because of the crosswind. The route itself is flat and I could’ve hit about 30-40km/h, but because of the cross wind I was running to only 20-25km/h. I already wanted to go back as it will take me at least 4 hours to complete the loop at this pace.

The lakeside view itself was pretty good. The cycling road is actually very narrow as compared to the Tamagawa and Arakawa cycling roads that I rode. Also, cars and motorcycles were allowed to pass so it was really not as smooth as you wanted it to be.

It took me about 10km before I finally realized that it is totally pointless to fight against the crosswind. I also two cyclists on yellow jerseys passing by the parallel road. I decided to follow them. Man, I was running at 35km/h when I used that road!

At about 20km from Tsuchiura station before crossing the 1 kilometer Kasumigaura bridge, there’s a restaurant-slash-bicycle shop that servers snacks. Their menu isn’t that much and quite costly, but it’s a good way to relax and refresh. I bought myself a hotdog sandwich and ginger ale. There were a lot of cyclists too take a quick break.

After recharging myself, this was probably where I almost exhausted myself. The ride at the lakeshore, and even the roads parallel to it have very strong crosswinds. I was running at 14km/h, and my bike slightly inclined to the right to fight off the wind. There were several occasions too where I would lose my balance all of sudden because of a strong gush of wind. I could only hear the winds, and feel its might through my body and eyes. The road itself is quite boring as you are in the lakeshore. It was all water on the right, and rice fields on the left.

I bumped into several cyclists, probably around 5 in my memory count. The sight of people fishing also was amazing. If you see a car parked nearby, you would often see someone fishing on the lake. After about 41kms of this punishment, I ate some bread and ice cream from the nearby 7-eleven kombini. I wanted to buy water already but it seems I still had about 1/3 of my water bottle. I decided to defer and just find a vendo machine somewhere. This area already had people and cars so it felt a bit safer for me

The remaining distance of this ride was probably the most painful, as always with my 100km rides. It’s as if you are just surviving yourself to make it to your destination. You no longer enjoy the view, your shoulders begin to get strained, your ass becomes painful, and you are too exhausted.

My phone also went below 20% battery and I already began to panic. I started turning it off, and only open up data when there are crossroads that I’m not so sure of where to go. The lakeshore road also began to be a punishment to me because of the strong unending crosswinds. I decide to just hit the highway alongside with the cars. Everything became familiar already and you are out of the crosswind and ricefields, but instead immersed yourself back to civilization with all the cars and traffic lights.

I managed to arrived back at Tsuchiura station around 5:30pm. And my girlfriend was already patiently waiting for me to arrive. The good thing when you start and end at Tsuchiura station is because of the built-in facilities for cyclists. The changing room and the washroom was really helpful. I smelled like the sun, albeit manly. But still I don’t want to disrupt other passengers (and my girlfriend too!) because of my bad odor. Lol. After changing, we ate at this restaurant called Hao2 Rice and Bar at the 3/F of Play Atre mall. They serve great food and the staff are really nice especially with customers having bicycles with them. We met one of the servers to who was half-Filipino and half-Japanese. She couldn’t speak Filipino, but I’m pretty sure she was able to pick-up that my girlfriend and I were speaking in Filipino.

Ahhh. Nothing beats a good dinner after a very very long and tiring ride.

Kasumigaura Lake Loop is a very good cycling route if you want to train for crosswinds. So I hope you get to enjoy it inasmuch as I did. It’s all flats, but definitely it’s not a walk in the park!

If you want to know more about this route, you can check my Strava ride below: