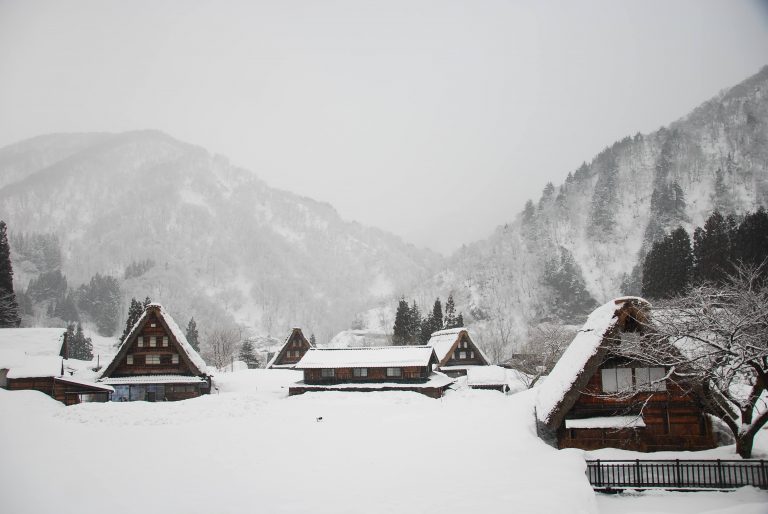 Gokayama village in winter was probably the highlight of this trip. This was day 2 of our Shirakawa-go Village Winter Illumination 2018 bus tour. Our hotel was at APA Hotel Kanazawa, and we had a great breakfast buffet at Seattle’s Best Coffee. I actually liked their cookies that I had to sneak out 2 pieces.

Our first stop that morning was at the Kenrokuen Garden. The Kanazawa Castle is located right in front but our tour didn’t go there. Jenny and I enjoyed the frozen garden, “playing” curling, buying omiyage, and figuring out the exit of the maze that this garden is. It’s so huge!

It started to snow as we approached the entrance to the garden. There’s also a strip of shops that you can see before entering.

For some reason, I don’t know what these are for. My guess is that this is their way of checking or forming the trees into a cone shape? These also appear on their postcards. Please correct me if I’m wrong.

Kenrokuen Garden is really huge so I suggest spending more time here or at Kanazawa Castle. However, time is limited so we had to find our bus!

Our next stop would be at Gokayama Village. I didn’t know about the place, and didn’t know also how beautiful it is during winter. On our way to Gokayama, the sight was so pure and white. We saw pyramid-ish foundations at the side of hills. Most probably these are to prevent snow landslides on the road.

It was still sunny weather when we were on the way, but as we approached Gokayama village, it started to snow. The tour guide told us that it’s actually beautiful weather today as compared the previous week wherein there was heavy snow. Upon arrival at the parking area, you will have to go down the elevator and there’s only one elevator. Multiply that to the number of tourists arriving. Tough.

We explored the village and found ourselves to be spending a huge amount of time taking photos and enjoying the sceneries of the gassho zukuri houses and snow.

Since there were a lot of tourists already at the area, and we didn’t have any couple photo together, we asked one of the groups to take a photo of us. Apparently, they speak Chinese and Jenny can also speak. So we were able to ask them. Xie xie!

We wanted to build a snowman, but time is running out. We were also late for 5 minutes and the tour guide told us to always check the time. There was foot traffic at the elevator down below that’s why we were late. We weren’t able to take that into account, but noted on time! After Gokayama village, we went to a place where there’s a tunnel of small falls. I forgot the name of the place. The only thing memorable was that were caught up with a very strong snow flurry that we had to walk backwards because snow was hitting on our faces hard.

We also went to Hida Takayama, but we were just too tired and exhausted. Gokayama also already made our day so we just decided to shop and eat near the bus parking.

On our way back to Lake Suwa, we got back Jenny’s wallet from the reception. So finally I’m no longer the sugar daddy of this trip. Jenny bought items from the shop for the tour guide and drivers as a way of gratitude for helping us out! And of course, she missed this delicious lunch bowl the other day, so I bought her one. Look at the smile on that face!

We arrived at the tour bus first, and the tour guide congratulated us. We just said that we’re too tired to roam around the area. On our way back to Tokyo, we were greeted by a magnificent view of Mt. Fuji over the highway. The tour guide told everyone that people from Tokyo don’t really appreciate it versus those who lived far from Tokyo.

And by the way, in my previous post where I shared about the old man we helped during dinner? He actually approached Jenny and handed over a clear folder with photos. At first we didn’t know what it was all about. We thought maybe he was selling. So I told Jenny to ask the old guy how much the photos are. The old then smiled and tapped Jenny’s head like a daughter and told her it’s free, because we helped him, and that he took those photos. We really didn’t expect that because it was but natural for us to help someone in need, even as silly as getting a tissue.

After alighting at Ueno station, we asked for old guy’s name. His name is Takeshi-san. We asked him if it’s okay for us to have a selfie with him, to which he agreed. We also asked the driver/s and the tour guide for a photo. By the way, follow the driver’s instagram as he snaps and posts photos of his trips.

Overall, our second day was the best of this tour. I would love to take this tour again in the future as I enjoyed Gokayama village so much!